Collaboration with a timber framer 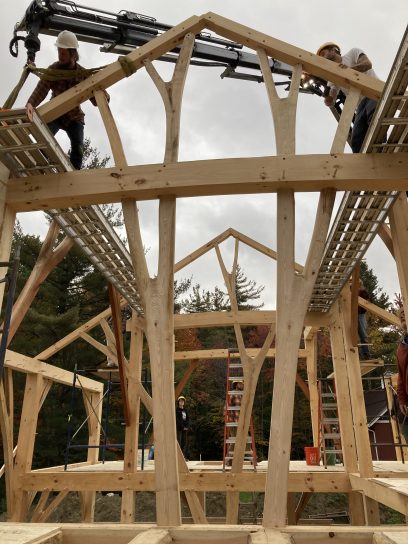 We are lucky here in the Berkshires to have many talented timber framers and timber architects. Jack Sobon recently designed a home for a family in Windsor, that East Branch Studio has been collaborating on building. Dave Bowman, a master sawyer and timber framer based in Cummington, headed the crew which brought Jack Sobon’s design to reality. This house involved many crotched braces and posts that give the home a very organic feel. All of the timber from this project was harvested from the homeowners property, and almost 20 different types of wood were used in the frame.  This type of local resource use is a powerful way to not only support our local Western Massachusetts woodlands economy, but keep our timber framing knowledge strong here in western mass, and reduce our carbon impact by minimizing transportation and processing of wood products.

Here at East Branch Studio, we look forward to continuing to work with local timber framers, sawyers, and loggers, to support a sustainable and thriving woodlands economy, while keeping the craft and art of timber framing strong here in New England.

The entire process impressed me….from the team itself, to knowledge of their field, from integrity of design; to excellence in craftsmanship and careful control of costs…and more. The process itself has left me very appreciative of East Branch Studio and their team.

Kent Hicks brings great talent, integrity, and intelligence to the building process.  He is innovative, perfectionistic, respectful, easy to talk to – we would never work with anyone else!

Our house is not only efficient, but beautiful, thanks to Kent’s aesthetic sense, design collaboration, and high standards. We love our new house!”